The following is a guest post by Dr. Dan Kuester, the Director of Undergraduate Studies and the Roger Trenary Chair for Excellence in Economic Instruction at Kansas State University.  Dan and I were graduate students at the University of Missouri back in the 90's.

I have seen this influence from a couple of different perspectives as I am an alumnus of Missouri who has taught at Kansas State University for nearly eleven years.  Fans of those respective schools typically have very different views of those schools which have moved conferences for a perceived better deal.  (I do highly recommend “The 100 Year Decision” by R Bowen Loftin for a very insightful perspective on Texas A&M’s move to the SEC).

While some folks continue to “cut the cord”, television contracts (which are at least somewhat ratings driven) are a huge source of revenues for all sixty six BCS level institutions (I am including BYU and Notre Dame).  Texags.com recently put together an infographic showing the ratings averages for each of these sixty six schools.  Certainly, the author enjoyed sharing the results which showed the somewhat predictable SEC dominance on the ratings and The Big 12 lagging behind in fifth place out of the five BCS Conferences.

The University of Texas tied for 34th in the television ratings while A&M placed 12th , the type of news Aggie fans enjoy a great deal.  The highest-ranked Big 12 team was Oklahoma at #26 while SEC teams made up twelve of the Top 25 spots.  Also, in the twenty-five most-watched football games this season (not counting bowls), SEC teams participated twenty three times, Big Ten teams participated eleven times, ACC teams participated eleven times, while Big 12 and Pac 12 teams were only represented one time each as were Army, Navy, and Notre Dame.  It is fairly obvious that the Big 12 did not have any single game that drew huge ratings.  The highest rated Big 12 game (TCU vs. West Virginia with 4.43 million viewers) finished well outside of the Top 25 rated broadcasts.  My analysis of the data also suggests that the relationship between CBS and the SEC is very beneficial for the conference even as a “loss leader” as nine of the twenty five most viewed games were on CBS.

As an economist, when I study data like this at SportsMediaWatch.com I immediately want to make sure what is being looked at is an “apples to apples” comparison.  The thing that immediately stood out to me was there are a number of games on stations like ESPNU or FS1 or FS2 that bring down the average rating for a team dramatically.

Obviously, a complete picture of television ratings should include all twelve (or more) games that a team participates in.  Unfortunately, this is not something we can figure out because of a lack of access to all relevant data.  I would suggest that games on the SEC Network or the Big Ten Network are drawing considerably more viewers than a game on the Longhorn Network. This in turn probably dwarfs the number of fans who are watching a game on K-State HDTV, which is internet-only.  But since games on all of these avenues (along with the Pac 12 Network, regional Fox Sports networks, syndicated ACC games, pay per view games, etc.) are not rated, it seems unfair to cherry-pick the games that warrant a broadcast on CBS, ABC, ESPN, FOX or other major networks and only count those games as an indicator of the popularity of a team.  For example, Florida ranks seventh in the ratings TexAgs.com compiled, but they were only on a rated television broadcast five times this year in the eleven games they played.  Meanwhile, Oklahoma was on a rated broadcast eleven times in the twelve games they played.  Clearly, if games against Kansas and Iowa State were on a station that did not report TV ratings, OU’s average television rating would go up fairly dramatically.

In order to attempt to correct for this bias, I assumed that there were no viewers for games that were not rated telecasts and then recalculated the average rating per team.  I realize that this is an imperfect method but for the most part (with notable exceptions such as the Texas A&M vs. South Carolina game on the SEC Network) the games that do not warrant a broadcast on an established network will draw a small enough viewing audience that assuming a value of zero for these games will only bias these numbers slightly.  I would encourage suggestions as to other ways to correct for this bias, but I did not want to start guessing television audiences for these non-televised games.  I do feel that the teams that are most adversely affected by this correction are SEC and Big Ten teams as the SEC and Big Ten Networks are probably drawing the most viewers for games where ratings are not available. 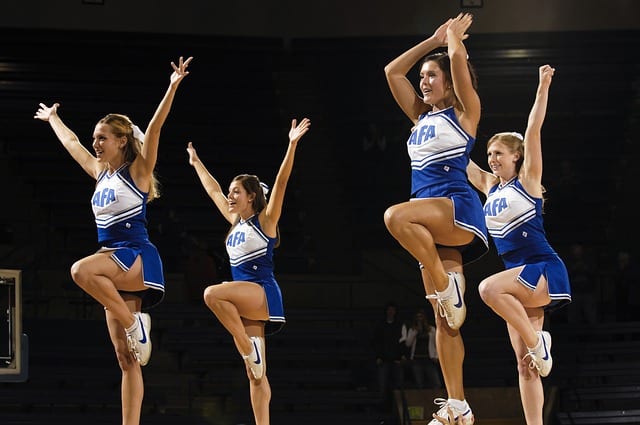 The TexAgs data suggests the following average ratings (I believe I have replicated this correctly).

Finally in the original data there are twelve SEC teams in the Top 25, seven Big Ten teams, three Pac 12 teams, two ACC teams, and one independent team.  In the adjusted ratings there are ten SEC teams, five Big Ten teams, five Big 12 teams, three Pac 12 teams, one ACC team and one independent.  This data will have a slight “pro Big 12 bias” as over seventy eight percent of Big 12 games were rated while other conferences are between fifty three and sixty percent rated games.  To reference the examples I pointed out above in these adjusted ratings Oklahoma finished 15th in average TV rating (up from 26th) while Florida finished 22nd (down from 7th).

Another important note about these adjusted ratings is BYU looks a little better by comparison when one considers they were on television nine times last year on a rated network.  Their adjusted ratings would put them right in the middle of the ACC rankings.  I personally feel (possibly a football only member) they would be a strong potential addition to the Big 12.

All of my data is available at my webpage (see the bottom of my page for the links )  and any errors in calculating the number of games each team had rated are my own.  Here is the revised Top 25.

(Assumes no viewers for non-rated games)

Recently, pressure has been mounting on betting operators to limit the amount of betting adverts during sports programmes. The American Gambling Association is coordinating their efforts with the biggest betting firms to make sure that sports betting activities are marketed solely towards an adult audience.

It's Still Good to Be the Cupcake

Cubsidies: The Cubbies Want in on ...