The Mirror's headline was easy to predict, as the English tabloids are amazingly consistent. 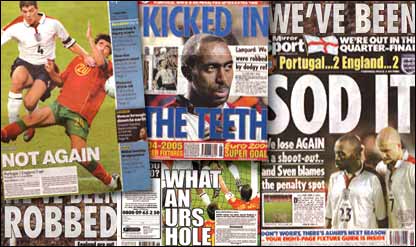 England's coach Sven-Goran Ericksson was more diplomatic, but it does appear that he gave the referee a piece of his mind after the game:

"You ask were we robbed," Eriksson said at a farewell press conference: "That's a very strong word. There were mistakes but all people in football make them.

"My opinion hasn't changed, I thought sitting on the bench it was a goal."

Eriksson did admit that he had a conversation with the referee about the match.

"I went to the referee's dressing room after the match and said what I had to say and that will stay between him and me," he said.